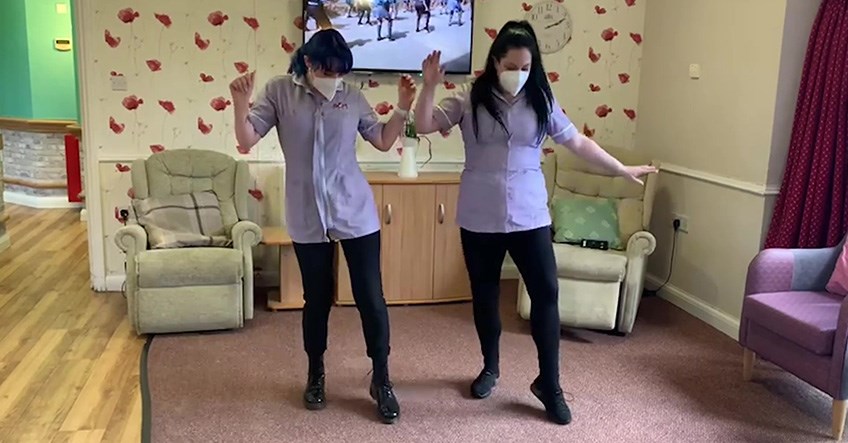 A song that topped the South African music charts in 2019 has sparked a global dance trend with many taking to social media to perform a dance reel coined the ‘Jerusalema Dance Challenge’.

What is the Jerusalema Dance Challenge?

Garnering over 340 million views on YouTube [18th February 2021], ‘Jerusalema’ - a gospel-influenced house song performed by singer-songwriter Nomcebo Zikode - was first used by a group of friends in Angola, South Africa.

With their simple choreography, they have inspired millions around the world to copy the now tutored routine – and none more so than Templemore Care Home in Northampton.

Why is the Jerusalema Dance so popular?

Harnessing popularity through social sharing and encouraging friends, family members and other users to accept the challenge, the Jerusalema dance has brought a positive new light to uncertain times.

It has enacted a simple way of uniting communities across distance at a time when many are hungering these possibilities.

What other countries have done the Jerusalema Challenge?

At this stage, a better question would be which countries have not done the Jerusalema Dance Challenge! Starting on the continent of Africa and spreading throughout America, Europe, and even Israel’s Jerusalem itself, one of the more recent entries has come from B&M Care.

Filmed entirely by staff alongside residents and the home’s management team, Templemore Care Home in Northampton confidently danced around the home. The decision to take part was to instil a collective sense of togetherness – lifting spirits and morale, as well as recognising the efforts of staff made throughout the past year.

“It was so much fun making this video: a viral song that went viral in our home – we were addicted,” said Ines Lochmele, Templemore Care Home Engagement Lead.

She continued: “By combining our love of music, dance and culture with a sense of simply being together - it really shines through in the video. Now, we look forward to another B&M Care Home accepting the challenge.”

How do I take part in the Jerusalema Dance Challenge?

Learn the dance and upload to any social media channel using the tag #JerusalemaChallenge – then encourage others to take up the challenge!

Thank you for requesting a place at the Templemore Presents: Jerusalema Dance Challenge.